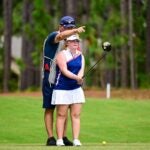 Joe Bockerstette lines up his daughter, Amy, for a tee shot at the US Adaptive Open.

No one from the dozen or so players, parents and volunteers surveyed Monday in Pinehurst could recall ever attending an event of its scope, its breadth, and most importantly, of its meaning.

“There were tears this morning,” Jenny Bockerstette, mother to internet sensation Amy, told me on Monday. “And there will be more, I’m sure.”

It is, by nearly every measure, the widest Open ever. The field consists of 96 players — both men and women — from ages as young as 16 and as old as 80. Players compete from four sets of tees, are permitted to navigate the course in the method of their choosing (both motorized cart and feet are accepted forms), and have stroke indices ranging from the low-20s to well better than scratch. All this is to say nothing of the field itself, which is surely the most unique in golf history.

Every member of the field, each of the 69 players, is in some way disabled. The impairments vary by player, and each carries its own deeply personal story. Some players have lived through the trauma of witnessing their own lives change, while others face challenges brought about by birth. For the purposes of the tournament, the competitors have been sorted into eight groups: arm impairment, leg impairment, multiple-limb amputee, vision impairment, intellectual impairment, neurological impairment, seated players and short stature.

At the Adaptive Open, the players are competing for one of two trophies, which will be handed out to the lowest-scoring player on both the men’s and women’s sides at the end of 54 holes. The USGA will also award copper medals to the low-scorer in each of the categories on the men’s and women’s sides (the women will only receive seven medals, as they do not have a short stature competitor in this year’s field).

But in many ways, the stakes are so much heavier than hardware. This is the first event of its kind in golf history, and as such, it’s an opportunity to blaze a path for all that comes after it. For now, the work feels very much trivial. There are stereotypes about “ability” to disprove, a seat at the table to be earned. Golf’s growth in the post-Tiger era hasn’t reached the adaptive game, where players and their loved ones repeatedly cite “awareness” as the largest issue facing their slice of the community.

It’s understandable why many in the field feel an implicit pressure to perform, to entertain, to “prove” the event’s worth. This week is about the tournament, yes, but it’s also about their hope — or perhaps need — to see their passion recognized by their sport. These are difficult emotions to process, particularly when facing the explicit pressure that comes with executing golf shots in searing, late-July North Carolina heat at an unfamiliar venue. The nerves were real on Monday morning, shortly before balls went into the air for the first time at Pinehurst No. 6.

“Let’s say there’s 100 points of anxiety, if I can take 90 of them with me as his mom, I figure he’s only got 10,” said Liz Thomas, mother of Jordan, who recovered well from two early bogeys to shoot a 4- over 76. “So I can take the jitters away. I don’t think it really works. But I’m trying.”

Even for the relaxed competitors on Monday, the golf looked different. Very different. Thomas, a double-leg amputee, filled his Footjoys with two prosthetics (styled neatly with American flag socks). His swing — which, he quickly remembered, I once called ‘preternaturally wonky’ — is that way for a reason. It takes him “40-50 percent more effort” to generate the same clubhead speed as an able-bodied person, his parents said.

Some played a style that was even less recognizable. Billy Fryar, who is paralyzed from the chest down, drove his cart right onto the green, using his hands and a rotating seat to address the ball. Jesse Florkowski shot 75 on Monday… with one arm.

“He’s always the only one with a disability, and people are pretty awestruck when he’ll play,” Mrs. Thomas said of her son. “But to have a full slate of people that have disabilities. For them to be out here, and to be able to play golf and to make the commitment that they are making to get out here. It’s very humbling.”

The rules of golf were changed accordingly for the tournament, which is contested under the USGA’s modified rules for golfers with disabilities. Depending upon their category impairment, players are permitted to compete using on-course aids, loosened club-anchoring rules, and adjusted drops in order to accommodate carts.

These changes were particularly noticeable among the caddies. Joe Bockerstette, father and caddie to Amy, was his daughter’s golf conscience. He steered her angles, talked her through shots, and, like all good caddies, knew when to snap her attention back from an overzealous reporter. Brian Olson, father to blind former USC football player Jake, was even more essential. On Monday, he was his son’s eyes, responsible for painting the word picture for Jake’s every swing. Olson was a golfer before he lost his vision at age 12, and he’s been a golfer ever since. He shot a no-gimmes, putt-everything-out 102 on Monday, and saw none of it.

“We put a lot of time and effort into golf and realized, hey, this is something we absolutely can do,” Olson said. “It was a love of mine before [I lost my eyesight]. I made the decision that blindness wasn’t going to rob me of anything I love in life, and that included golf.”

At the Adaptive Open, the differences are perhaps less striking than the similiarities.

Some experiences in golf are universal. There are still 18 tee boxes and 18 greens. There is still the joy of a well-struck shot, still the camaraderie of a shared pairing with strangers, still seems plenty good bounces and, it, just a few more bad ones. The frustration of a missed three-footer, it turns out, is just the same if someone has to tell you you missed it.

Golf’s soul is safe at the Adaptive Open. Even if the rules are different, there is a deep integrity for upholding them. There are no handouts, and certainly no shortcuts. Every stroke is earned, even if there are five of them in the sand. The players here treat golf with a preciousness, and could you blame them? For many, the mere act of playing 18 holes was once something they believed impossible.

Once the sticker shock wears off, a different type sets in. The kind that reminds you golf is a blessing. Not necessarily in its glory or difficulty, but in its community.

As the final group came down the 9th fairway on Monday afternoon in Pinehurst, their parents trailed just a few feet behind.

It was just past noon and blisteringly hot in the sun, but the parents seemed stirred by a different kind of warmth.

“Thanks for coming out here,” Jenny Bockerstette told Liz Thomas, before interrupting herself. “Well, you’re probably cheering for someone else.”

Just then, Amy blasted a 3-wood up the fairway that came to rest on the apron of the green. Amy unleashed a fist-pump. Her playing partners offered perfunctory praise. The small group of parents cheered.

Liz turned back to Jenny.

“Actually,” she said. “I think I’m cheering for all of them.”

James Colgan is an assistant editor at GOLF, contributing stories for the website and magazine. He writes the Hot Mic, GOLF’s weekly media column, and utilizes his broadcast experience across the brand’s social media and video platforms. A 2019 graduate of Syracuse University, James — and evidently, his golf game — is still defrosting from four years in the snow. Prior to joining GOLF, James was a caddie scholarship recipient (and astute looper) on Long Island, where he is from. He can be reached at james.colgan@golf.com.