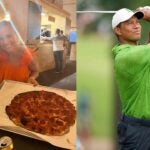 Hello friends and welcome to this week’s edition of the Rogers Report! Between In Gee Chun’s win at Congressional, Xander Schauffele’s victory at the Travelers, Pierceson Coody saying no to big LIV money and immediately logging his first win on the Korn Ferry Tour and — this one’s for the real fans — Dylan Menante defending his Northeast Amateur title , it was a very solid week of golf. Let’s run through how it went down on social media.

Okay, so this technically wasn’t documented on social media, but I would still like to discuss it here. After the first round of the Northeast Amateur in my hometown on Wednesday, I got a call from my friend Davis Chatfield asking if I could loop for his pal in Round 2.

I ended up caddying for Purdue golf’s Herman Sekne for two rounds. Folks, I do know a lot about golf, but I haven’t spent much time on the bag. Lucky for me, Sekne made it clear that he had low expectations for me — carry the clubs and bring good vibes. Even luckier for me, Sekne went 22 holes without hitting into a bunker so my job was pretty easy. I didn’t help with reading putts, but I made sure to stay out of the way and to keep my player hydrated! All in all, it was an awesome experience and definitely reminded me that caddying is not an easy gig! Carrying a regular bag is one thing, but I cannot imagine hoofing it around with a Tour bag week in and week out.

Okay folks, enough about me. Well, almost. I do want to show you all the coolest new headcovers I got from my pals over at Tremont Sporting Co.

How cool are these? I told my friend (and fellow Boston College alum!) Christian Cavaliere that I love all things Rhode Island, ice cream, Boston College and Tiger Woods and he made my headcover dreams come true. My golf bag just got 30 times cooler.

The greatest height difference in golf?

While we’re on the topic of the Northeast Amateur, let’s take a moment to appreciate this photo.

Tommy Morrison is a rising senior in high school (!) and is almost seven feet tall. Davis Chatfield just finished his fifth year at Notre Dame and is five-foot-five. The height difference here is striking, to say the least. It reminds me of the time I got a picture with a 6’11” Villanova basketball player. But while I wouldn’t have much of a chance in a game of one-on-one against Daniel Ochefu, it’s super cool that these guys have such different builds and are both able to compete in our sport at a high level. Chatfield finished the event tied for 15th and Morrison was T-40.

The World No. 1’s birthday celebration

World No. 1 Scottie Scheffler turned 26 at the Travelers Championship last week, and the fine folks at TPC River Highlands made sure to celebrate the Masters champion in style.

Scottie and Meredith Scheffler then went to Sally’s Apizza in New Haven to celebrate the big 2-6.

I looked up this pizzeria online, where it’s described as an “Iconic pizzeria known for its coal-fired, thin-crust pies, long lines & basic, no-frills digs.” I hope the birthday boy and World No. 1 got to skip the long lines. (Also: I’m very aware that these images are a tad blurry. I screenshotted them directly from the source: Scottie Scheffler’s Instagram stories. If you’re disappointed with their quality, please file your complaints to Mr. Scheffler himself.)

In Gee Chun being extremely relatable

Things that are not relatable: In Gee Chun firing a first-round 64 at the KPMG Women’s PGA Championship and leading by seven on Thursday and the fact that she has won three different majors. Imagine being 27 with three majors to your name? I am 27 with three pairs of sneakers to mine.

What is relatable, however, is the conversations Chun had with her caddie on Thursday.

Pimples and kiwis! A gal after my own heart.

It’s always a treat to learn more about the coolest sisters in golf, and I thoroughly enjoyed this game of “would you rather?” that Jess and Nelly Korda played during a rain delay at Congressional.

The banter between the two is so great. It reminds me of the relationship I have with my sister, except for that neither of us are any good at golf.

Tiger Woods out and about

First up, we have Tiger at a junior event in Florida.

Is this the first time we have seen Tiger’s bare leg since the accident? I believe so! I’ll let you do the honor of zooming in on it if you feel so inclined, but I continue to remain stunned at this man’s comeback, especially after seeing this.

Next up we have Tiger at a soccer tournament (probably Sam’s) in San Diego. Men have been practicing their golf swings in public since the Ice Age, but seeing Tiger do this is wild. No big deal, just a five-time Masters champion in a sleeveless shirt taking some swings on the sidelines! I feel bad saying that I would have 100% paid more attention to this than to the soccer game, but it’s the honest truth.

Jason Kokrak hit a walk-off shot on Friday at the Travelers and I’m not quite sure what to make of it.

I’m not the walk-off police. I also don’t usually condone walking off the course mid-round. But this was like, 99% of the way into the round, and it sounds like he was trying to get out of the way, so I kind of respect it — especially since he was going to miss the cut anyway. I’d like to think that Kokrak left his ball where it was and headed straight to the clubhouse for a beer.

Next up we have this putt from Sahith Theegala’s 72nd hole. If you have a weak stomach, please proceed with caution.

Is this the most vicious lip out of all time? At first, I thought it was definitely going in. Then I thought it definitely wasn’t. Then I was like, “wait, that’s in!” but it wasn’t! I’ll need several days of recovery, so I can only imagine how Sahith himself feels.

I’d hate to end this column discussing a missed putt, so let’s dive into the Nickelodeon Slime Cup quickly. I’ll be honest, I didn’t watch it, but it did provide some great content on social media.

The photos we didn’t know we needed. I would’ve paid the big bucks (read: maybe $20) to be a fly on the wall for this event.