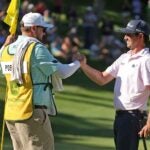 JT Poston, right, and his caddie, Aaron Flener, after Poston’s win on Sunday.

Check in every week for the unfiltered opinions of our writers and editors as they break down the hottest topics in the sport, and join the conversation by tweeting us @golf_com. This week, we discuss LIV Golf’s event in Portland, the response from the PGA Tour and DP World Tour, Tiger Woods and more.

1. The PGA Tour v. LIV battle took its much-anticipated turn this week, when the upstart circuit played on American soil for the first time, going head to head with the Tour. Let’s start with the broader picture: What was your takeaway on having two men’s tours squaring off against each other? Could competition be good? Could it water down the product? Something else?

James Colgan, assistant editor (@jamescolgan26): It did not help the PGA Tour to have the John Deere — annually one of the weakest events by field strength — up against LIV’s maiden voyage on US soil. Now, I didn’t think the LIV event proved much of anything (other than it is perhaps a good idea for Talor Gooch to sit the next few pressers out). But I’m not sure it did the Tour’s “best players, tournaments and fields in the world” argument any good to stare down Bryson, DJ and Brooks with … JT Poston.

Josh Sens, senior writer (@joshsens): Agreed, Sean. There’s not a market for that much golf, at least not one that justifies the money that many players would argue that they deserve. In terms of the two events that were happening in the States, my main takeaway was they underscored the extent to which fault lines in golf fandom appeared to be solidifying, with two sides shouting insults back and forth. The parallels with our politics are as disheartening as they are plain.

2. As for the actual play, Branden Grace won and cashed the biggest check of his life ($4 million), and the team of Dustin Johnson, Patrick Reed, Talor Gooch and Pat Perez won the team portion of the event, with Perez winning around a cool million, despite shooting a Saturday 80. What do we make of all this? While there’s something to be said for playing for a boatload of cash, could the quality of play diminish if players are still taking home a huge sum, regardless of their finish?

Colgan: I think there’s something to the team format, even usage if LIV’s current is wonky and inauthentic. Almost every other major professional sport thrives based on fans’ allegiances and rivalries with certain teams. Why wouldn’t it work in golf?

Zak: Dustin Johnson said he’s more Motivated to win LIV events than normal Tour events, given the purse size. Hmm! So perhaps it’s about the money? It always has been. But I’m still not buying what DJ is selling. I’ll bet he grinds harder at home this week before St. Andrews than he was for LIV Portland.

Sens: DJ hurt after he won the Masters. I don’t doubt that the money motivates him, but playing for meaningful trophies clearly does, too. Whether guys like him get to continue doing both in the long run will be a huge factor in how this fight shakes out. As for whether guaranteed fat paydays hurt or help the quality of play, I dunno. The more important question is whether it makes things more interesting for fans. In my opinion, it does not.

Zak: LIV London was all about getting to the finish line. Getting an event completed. LIV Portland was about momentum, opening up the content wheel, and apparently Greg Norman becoming much more visible. Normalization is working to an extent. The biggest story of the week is that LIV is kicking off its 14-event season an entire year ahead of schedule. That means they know they’ll double their amount of contracted players in the next 6-8 months. That’s a huge piece of evidence that they think it’s working.

Sens: I’m with James in the first definition of ‘working,’ and it will continue to work in that way as long as the Saudis keep the spigot open.

4. The PGA Tour and DP World Tour didn’t go without striking back, as they strengthened their alliance in a new 13-year joint operational agreement between their organizations. As part of the arrangement, the PGA Tour will increase its ownership stake in European Tour Productions from 15 percent to 40 percent, providing a cash infusion to boost purses, and the arrangement also guarantees that, starting in 2023, the top 10 finishers on the DP World Tour will receive a PGA Tour card for the following season. Good moves? Not enough?

Colgan: It doesn’t seem like anybody’s happy with the current arrangement between the PGA and DP World tours. Will more money solve that? I don’t know. But I do think it’s a good thing for the morally upright version of golf’s future to have the two major professional tours working in concert.

Zak: Great moves. Strong, sustainable moves. But moves we won’t see the effect of for many, many months still. As stated above, the biggest deal this week is that LIV is moving forward with its rollout plan even faster than previously imagined. And meanwhile, we’ll be waiting for the strategic alliance to prove itself until late 2023?

Sens: I’m not sure what other moves the tours could make, but it’s also not clear to me that they will be enough to win the fight they’re trying to win. What all of these convulsions seem to indicate is that the four majors stand to gain even more in primacy, with golf starting to look to more and more like tennis, with a small handful of events that mean a ton to fans and players alike, and The rest of the calendar filled with the events of the hardest of hardcore followers.

5. One notable rules sequence happened during LIV play on Friday, when Brooks Koepka hit his ball into the water, then was able to look into a TV camera to determine where his ball crossed over the red line in order to make his drop. Now, that won’t work for us regular hacks, but would you like to see replay in play for rules quandaries, where it’s available?

Colgan: Replay has been a horrific, no-good, very bad addition to every single major professional sport. It is a pandora’s box of nonsense. An utter nightmare to pace of play. A cacophony of crap. No, it’s not a good idea to add that into golf.

Zak: That would be a slippery slope toward GPS trackers in the golf balls. Until baseball commands robot umpires, golf should mostly be about the naked eye, too.

Sens: If it could be done without slowing down play — a big if, I realize — I think it would be a good thing. Sure, there have been a bunch of hiccups with golf replays. But the video reviews have also led to greater clarity in some important moments. They’ve even helped give rise to some smart rules changes.

6. Psst … Tiger Woods is playing golf Monday and Tuesday, at the loaded-field JP McManus pro-am, in Ireland. And then again the week after at the Open Championship, in what will be his first official start since the PGA Championship. What are you looking to see from him ahead of the last major of the year?

Colgan: I’m looking to see Tiger walk four consecutive days on a relatively flat golf course without his gait or his swing falling apart. I think we will see that. And if the wind kicks up, look out — with the distance factor mitigated, he might just be able to think his way into contention.

Sens: While we’re watching the weather report, let’s hope for wind. If it’s calm, these guys will do things to the Old Course that we don’t want to see, no matter how firm and fast it is. As for Tiger this week — I’m with James. It’s all about him being able to walk and swing without too much pain.