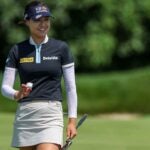 In Gee Chun fired a final-round 75 to claim her third major title.

BETHESDA, Md. — Lexi Thompson pulled her visor down low on her brow and squinted her eyes. As she looked down at her scorecard, tear drops trickled down her nose and splashed onto the paper in front of her.

An hour before, she held a two-stroke lead with three holes to play at the KPMG Women’s PGA Championship. Now, she was signing her scorecard — a one-over 73 — as the PGA of America touted their newest champion on the 18th green.

Thompson used her sunglasses to hide her eyes. When the scorecard-signing ritual was complete, she thanked the official, exchanged pleasantries with her playing parters and walked out to the fans gathered in hopes of snagging an autograph.

The scene was all too familiar. Heartbreak for Thompson, jubilation for others.

An hour earlier, it felt like the story would be different. This time, Thompson would be the beneficiary of another’s collapse. She’d leave Congressional a two-time major champ, a smile on her face, be one of the best comeback stories in recent memory.

Instead, the status quo remained intact. The 27-year-old with oodles of talent — the former can’t-miss prospect — leaves Congressional Country Club still with just one major to her name. It’s been three years since Thompson last won, and eight since she won a major.

On Sunday, it looked as though those streaks would be snapped, and that the galleries would rejoice in the return of one of women’s golf’s most magnetic stars. What happened was another chapter in the heartbreaking story of Lexi Thompson.

As the leader prepared to tee off for the final round at Congressional Country Club on Sunday, everything seemed to be falling into place for Thompson.

Warming up on the expansive driving range, Chun — who slipped on a three-stroke, 54-hole lead — was not her usual self. Gone was the bubbly smile and effortless swing that had vaulted her to the top of the leaderboard. Instead, she wore a face of worry, and showed a swing that looked unfamiliar.

Thompson, on the other hand, looked totally in control. If she had nerves, she didn’t show them. Swing after swing, she sent the pearly white practice balls soaring into the clear blue sky. She looked at peace, a point she’d made to the media the day prior.

“I’m going out tomorrow playing like I have the last three days — playing relaxed, playing free, and just focusing on my game,” she said. “Whatever score I shoot, I shoot.”

Through four holes, it looked as though that score would be a low one. Despite a steady 15-mph breeze, Thompson started off hot. Birdie-par-birdie-par.

Playing alongside Thompson in the final grouping, Chun couldn’t match her competitor’s dream start and dropped two shots on those same holes. For the first time all week, Chun’s name did not sit atop the leaderboard.

“I want to tell the truth,” Chun said. “I couldn’t control all my pressure.”

Chun added two more bogeys at Nos. 6 and 9 for an outgoing 40. When the final grouping turned to the back nine, Thompson’s lead was two.

That’s not to say she was bulletproof, though. Short putts — long Thompson’s most glaring weakness — were giving her fits. At No. 8, she missed a four-footer for birdie. On the next hole, she missed an even shorter look. But with Congressional playing tough, her misses did not cost her any ground. Bogey was a common score, and pars did not hurt.

On the back nine, however, those short misses persisted. And on the inward holes, those misfires were far more grave.

At the 14th, Thompson missed a putt inside two feet — this time for par — that started her downward spiral. She bounced back with birdie at the 15th, but after sitting near the green in two on the par-5 16th, she walked off with bogey, making a mess of the hole with an iffy chip and three putts.

While Thompson battled her demons, Chun stayed steady. And when she poured in a birdie at the 16th, the two-stroke swing pulled the two into a tie with two to play.

“I believe if I stick to my game plan, then I believe I have a chance on the back nine,” Chun said. “So I try to hang in there.”

And on the 71st hole of the week, her persistence paid off.

Pressure putting has long been Thompson’s bugaboo, and on this day it was no different. The misses at 14 and 16 allowed the field to remain in the chase, but still, she had a chance. However, at the 17th, her putter cost her the tournament.

Facing a 25-footer coming across a slope, Thompson had the opportunity to put the pressure on Chun. Although Chun was closer on the green, if Thompson could roll one in, it would flip the script.

Thompson sized up the putt with her caddie, Will Davidson, and settled on a line. She stepped up to her ball, took a deep breath, and pulled the putter back.

As soon as the mall made contact, she knew it had too much juice. The ball traveled up the slope and began curving toward the hole as Thompson made a gesture with her hand. Slow down! The ball did not listen, and when it finally ran out of momentum, it was eight feet past the hole. She missed the comebacker.

Thompson looked shell-shocked. She had a two-stroke led just two holes earlier. Chun tapped in her par putt and walked to the 18th tee with a one-shot advantage.

“I think every player when they are playing golf and when they play from the last group on the last day, everyone has pressure,” Chun said. “I thought this pressure is not just me. Then the key is who can handle well.”

Chun handled the nerves on 18 like a pro. She split the fairway, hit an approach that bounded off the slope and over the green, and then got down in two for a finishing par.

When Thompson’s birdie try missed (low and short) Chun had officially captured her third major title — and the $1.35 million check that comes with it.

On the other side of the green, Thompson hung her head and dug through her bag. It was another missed opportunity — and this one seemed to sting the worst.

Thompson didn’t say a word as she signed her scorecard. She wandered over to the fans reaching over the bike racks and signed as many items as they were shoved her way. As her father looked on, he muttered an aside to her team.

“When will this pain and misery end?”

Thompson must have felt the same way. With three holes to play, she had one hand on the trophy. Now, she was accepting condolences from her adoring fans.

You’ll get ’em next time, Lexi. We still love you.

A defeated “thank you” was all she could muster. After all the fans were tended to, Thompson hopped on a shuttle and headed for the parking lot. She declined media obligations and charged up her courtesy vehicle.

There would be no press conference. No choking back tears in front of the camera. No facing questions about her putting woes. No reliving the latest heartbreak.

Instead, we’re left to wonder. Did this one hurt more than the rest? Or is she resigned to her place in history, a generational talent with far too many close calls?

Fans roared at the distance. Not far away, Chun’s victory celebration on the 18th green was underway. Lexi Thompson was heading home.

Zephyr Melton is an assistant editor for GOLF.com where he spends his days blogging, producing and editing. Prior to joining the team at GOLF.com, he attended the University of Texas followed by stops with Team USA, the Green Bay Packers and the PGA Tour. He assists on all things instruction and covers amateur and women’s golf.