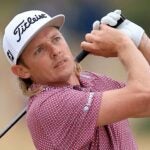 Cameron Smith hits his second shot on Sunday on the 17th hole at St. Andrews.

Let’s start with beer. For one, why not? It’s Sunday. But more importantly, your Open Championship winner is a fan. Cam Smith enjoyed a cold one in a lounge at St. Andrews soon after his world-beating final-round 64. And he talked about soon having more, both to the BBC and to reporters afterward.

“A few Aussies here, mate,” one diligent scribe began. “Congratulations to you. You said outside [to the BBC] a few beers tonight and fill the cup. Have you estimated how many beers it’s going to take in there to drink it up?”

“And how many more will you have after that?” the reporter asked.

And Smith and those in attendance laughed. He had to. No, he wouldn’t drink that much. Maybe. But, to keep this theme going, only an hour or so earlier, the Aussie was probably in need of something stiffer; a Scottish whisky perhaps. You likely needed one, too, even if you were Just starting your day stateside, as you watched Smith wiggle himself out of trouble, on the most famous hole, of this most famous course, with maybe the most memorable shots. His dramatics on the Road Hole 17th, which included a club slam from the normally stoic Smith, also came a wedge shot from, yes, a bar, the Jigger Inn.

So pour yourself whatever you fancy most as we review the lively sequence that won’t Smith the Open, though as we move along, we’ll offer some suggestions.

Stroke one on the 495-yard, par-4 17th. Smith is leading by one shot over Rory McIlroy, who is playing in the group behind him. Smith pops his tee shot over the Old Course Hotel, and it lands 322 yards away. You should pop open something bigger, though not too big; the long hole’s just starting. Let’s go with an IPA.

Oh, and Smith is a good driver, though not great. But he’s clear.

Stroke two. Smith is 177 out. And he hits it 158, though it falls short of the Road Hole Bunker. Smith slams his iron into the ground. Drink something bitter.

On the second shot, the trouble doesn’t go away on the right; you’ve likely seen the adventures from the road of the Road Hole. And Sunday’s pin is in the back left portion of the bumpy green, meaning the safe play is something toward the front. Though that’s easier to write than hit.

Smith, though, came up very short.

“That’s a bad miss,” Koch said on the broadcast.

Said Smith: “That second shot on 17, it’s just really an awkward shot, especially where I was. I kind of had to draw a 9-iron in there. You’re only trying to get it to 40 or 50 feet anyway. Just didn’t quite commit to the shape I wanted to hit and got it a little bit toey and turned over a touch more than I would have liked.”

Stroke three. Smith is 21 yards away. He puts his ball, it goes about 5 feet right of the bunker in front of him, it climbs the slope, then goes back down it, before settling, incredibly, 10 feet away. Bold. Smooth. Scotch time.

From Smith’s lie, there was no chance of getting it any closer. On a replay on NBC, Azinger said he’s seen players dump shots into the bunker.

Smith is set up for an up-and-down par on a day when the hole is playing a half-stroke above par, on a Sunday of a major championship, while holding the one-shot lead.

“That’s about all he could hope for right there,” Koch said on the broadcast.

Said Smith: “The putt next to the green, I mean, I was just trying to get it inside 15 feet, and the putter felt really good all day. I knew, if I could get it somewhere in there, that I’d be able to give it a pretty good run.”

Stroke four. Smith is 10 feet away. Koch on NBC says the break is a little right to left. Smith finds the center. He lifts his right hand to the crowd. A glass of wine feels right here, doesn’t it?

As Smith’s ball fell for his four, McIlroy was back in the fairway.

“Can this guy putt under pressure, Paul?” Koch said on the NBC broadcast.

“He has proved it to the world,” Azinger said.

“Just a pure stroke,” Koch said. What an up and down. Just as calm as can be. The rhythm of the stroke never changes.”

“Yeah, managed to get away with a four there.”

On 18, Smith birdies, no one catches him, and he wins his first major. Champagne.

Nick Piastowski is a Senior Editor at Golf.com and Golf Magazine. In his role, he is responsible for editing, writing and developing stories across the golf space. And when he’s not writing about ways to hit the golf ball farther and straighter, the Milwaukee native is probably playing the game, hitting the ball left, right and short, and drinking a cold beer to wash away his score. You can reach out to him about any of these topics — his stories, his game or his beers — at nick.piastowski@golf.com.