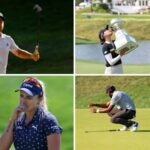 In Gee Chun and Xander Schauffele emerged the big-time winners from this week in golf.

Welcome back to the Monday Finish, where we’re avoiding back-nine collapses by refusing to get anywhere near contention. Wild week — Let’s get to it!

FIRST OFF THE TEE

The last time Morgan Hoffman made a cut was in the summer of 2019, when he finished T31 at the Greenbriar.

Even back then, doctors told him that just by playing he was defying the odds. Hoffman had been diagnosed with muscular dystrophy in 2017 and faced an uncertain future with no clear recovery plan.

Frustrated by a lack of options for treatment, Hoffman explored alternative methods, eschewing Western medicine, moving to Costa Rica and, well, you can read the rest here.

Hoffman played this week’s Travelers as the final start of his PGA Tour medical extension. To take full advantage of that extension, he’d need a special week — a top-two finish would give him full status the rest of the season and a top-four would mean partial status. When he opened with a round of two-under 68, perhaps that was still in play.

There was no dream ending, but Hoffman did accomplish something significant: He rallied on Friday to make the cut. After shooting two-over 37 on the front nine, he made four birdies coming home to shoot 70 and make the cut on the number. The weekend was less than special — Hoffman shot 73-71 to finish 68th — but it’s tough to see that as anything but a big-time win.

It’s fitting that In Gee Chun won the KPMG Women’s PGA Championship after opening with eight-under 64, fully five shots better than anyone else in the field. It’s fitting that she won after a second-round 69 left her six shot clear. It’s strange that she won after shooting 75-75 on the weekend, but that’s the luxury of playing the first two rounds on a different golf course than your competition. You get a little leeway on Sunday.

The victory marked the third major championship of her career. It also allowed Chun, who has spoken openly about struggling with depression, a moment to reflect on the highs and lows of her recent career.

“To be honest last week I talked to my older sister, and then I really cried,” Chun said. “I said, ‘It’s really hard to stay in the US, I don’t know what I want to do. I don’t have any goal because I can’t see the goal because I feel really hurt.’

The freedom of her sister’s words made her realize she could quit. And for that reason she chose not to. You still want to play golfshe told herself.

“Then I’m just so happy to make a win after all that happened,” she said, getting emotional. “I just want to keep saying, like, I’m so proud of myself.”

I can only imagine how Lexi Thompson must have felt coming down the stretch on Sunday. How does it feel when the thing you want the most — another chance at a major championship — puts you at risk of further heartbreak? Once Thompson took a two-shot lead midway through Sunday’s round, it ensured that her day would end either in redemption, or further, deeper heartbreak.

Things looked suddenly dire when she missed the hole on a two-footer on 14, but she looked ready to be the hero when she holed a birdie putt on the brutish par-4 15th, opening the lead to two once again. And when she was greenside in two at the par-5 16th, it was tough to see a path to victory for anyone else.

But then Thompson missed the green with her chip shot and raced the following putt well past the hole. Her ensuing bogey — plus a birdie from Chun — suddenly tied things up. A bogey at 17 meant that Thompson walked to No. 18 one shot back, and that’s where she finished — T2, again. Thompson now has 10 top-five finishes at majors since her lone title in 2014. We don’t know exactly how she’s feeling because she declined to speak to media post-round. So we’re left to imagine.

It’s funny to think of all the ways Xander Schauffele has won the last few years. He made his Presidents Cup debut in 2019 and came away victorious. He made his Ryder Cup debut in 2021 and won’t there, too. He had the low 72-hole score at the 2020 Tour Championship. He won Olympic gold last summer! And he even claimed a PGA Tour title at this year’s Zurich Classic, where he partnered with Patrick Cantlay.

But we still keep a score around here (for now) through two metrics in particular: PGA Tour wins and major championship wins. Schauffele still hasn’t conquered the latter. As for the former? It had been 3.5 years since his most recent official win at the 2019 Sentry Tournament of Champions.

It turns out the same guy who slammed the door with a wedge shot on the final hole of the Olympics still had that shot on speed dial. And so it looked awfully familiar when Schauffele’s wedge shot settled inside four feet on No. 18 at TPC River Highlands on Sunday.

“You just lock in. I don’t really know how to describe it,” Schauffele said. “Yeah, after I saw what happened I knew that there’s a chance par would win, and birdie for sure. So I had to hit the fairway. So I was just so locked in that moment to hit that fairway and swung as hard as I could off that tee. Nothing else really mattered.”

As for what happened? Well…

If he had to do it all again, Sahith Theegala wouldn’t change a thing about how he’d play the 72nd hole of the Travelers.

He came to the finisher with a one-shot lead, but he has no doubt he made the right call by hitting driver.

“It’s just a perfect tee ball for me. Just a high cut over the tree. I hit that a thousand times this year,” he said.

The ball found the fairway bunker down the left, leaving him 130 yards to the hole — if he could just clear the embankment. His wedge never caught a chance after impact, catching the lip and coming back to nearly the exact same spot. But Theegala wasn’t second-guessing that decision either.

That’s the one thing Theegala would change: His execution.

“Never in a million years did I think I would allow myself to blade it,” he said. “All I had to do was chunk it. We even said, like, this is a 50/50 ball. Just basically hit just a hair behind it. Somehow my body just, I just straight bladed it.”

There’s no question Theegala will be back. But that doesn’t mean he won’t feel the sting of a 72nd-hole double bogey.

Last year Haotong Li bottomed out at No. 542 in the world. He finished in the top 60 just once in 16 starts. He eventually decided this was it for his golf career.

“No one knows how much I have gone through over the last couple of years,” Li told the DP World Tour. “Ten months ago I nearly decided not to play golf. I thought I couldn’t play golf again.”

He added this: “If someone told me ten months ago I would win again, I wouldn’t believe that.”

There were plenty of opportunities for Li not to win on Sunday. He began the final round of the BMW International Open with a three-shot lead and birdied three of his first five holes to extend that lead to five. But he lost that lead with a string of bogeys midway through the round and needed birdies at 16 and 17 just to force a playoff against Thomas Pieters. That first playoff hole was hardly perfect either; Li’s eagle pitch skittered 40 feet past the hole. But then he canned it coming back and unleashed a celebration that showed exactly how much it all meant.

It’s tough to fault Minjee Lee for firing the second-best round of the day on Sunday. And it’s tough to fault her for following up a US Women’s Open victory with a T2 finish at her very next major. There’s no faulting her finish, either, given she birdied the final hole to cap off a back-nine two-under 34. But there’s no question Lee is going to think about the unforced three-putt at 17 on Sunday, given she finished just one shot behind Chun’s final tally of five under par.

Padraig Harrington Sunday’s final round at the US Senior Open began with a five-shot lead. He never quite lost it, winning the event in his debut by just a single shot over a hard-charging Steve Strickerwho began the day eight shots back but closed with six-under 65.

The senior major is the first of Harrington’s career and serves as a late-career complement to the three major championships he won in 2008-9.

Sunday must have been bittersweet for Patrick Cantlay. The good friend in him must have enjoyed having a front-row seat to Schauffele’s victory. The competitor in him must not have been thrilled about losing by eight shots in the final round to his most frequent playing partner. And the golfer must have been miffed by an uncharacteristically uneven round in which he drove it poorly, hit his irons poorly and struggled around the greens, too. His six-over 76 was the second-worst round of the day and sent him from second place to T13.

Three things to watch this week.

This week, golfers touch down at LIV’s second event — and its first in North America. The field is going to look distinctly different than it did a few weeks ago at the Centurion Club.

The first event was headlined by Dustin Johnson and Phil Mickelson. This field includes Bryson DeChambeau, Brooks Koepka, Abraham Ancer and Patrick Reed. And on Sunday several outlets reported that Matthew Wolff and Carlos Ortiz are joining the LIV contingent, too. That means it’s tougher to dismiss this field as mostly no-names and has-beens. The top of the PGA Tour remains intact — the top-ranked LIV golfer is Johnson at No. 17 — but there’s an hardy field behind him. How Portland (and America) reacts to LIV’s next step is well worth watching.

This should bring a smile to your face:

This is where I could tell you to dial in on the John Deere Classic — but instead I’ll direct you to this simple bit of golfing goodness, courtesy of Tim Petrovic at the US Senior Open:

We’ll see you next week!

Dylan Dethier is a senior writer for GOLF Magazine/GOLF.com. The Williamstown, Mass. native joined GOLF in 2017 after two years scuffling on the mini-tours. Dethier is a 2014 graduate of Williams College, where he majored in English, and he’s the author of 18 in Americawhich details the year he spent as an 18-year-old living from his car and playing a round of golf in every state.