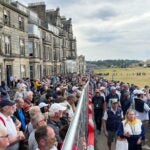 A fence on The Links pathway by the Old Course’s 18th hole divides the haves (tickets) and the have-nots.

ST. ANDREWS, Scotland — Leonardo DeGiusti, who turns 4 on Monday, was celebrating the occasion in style Sunday afternoon: perched upon his father’s shoulders and bellowing encouragement at his favorite golfer, Rory McIlroy.

“C’mon, Rory!” Leo cried as McIlroy strolled down the first fairway in the final round of the 150th Open Championship.

On the brownish-green expanse before Leo was one of the grandest stages in golf. To his left, the Swilcan Bridge; to his right, the sprawling 18th green and beyond that the 1st tee and stately R&A clubhouse. Directly ahead, on the far side of the 18th and 1st fairways, was a towering and packed grandstand topped by one of the Open’s iconic yellow scoreboards, which this week McIlroy said he could see from his hotel-room window.

It was a priceless moment for little Leo, which was fitting, because his parents, Mike and Kasey, didn’t pay a single euro for it.

The DeGiustis were soaking up the atmosphere from The Links, a public walkway that runs nearly the length of the 18th fairway. During Open weeks, the path is divided by a wire fence. The side closest to the course is for paying ticket-holders; populating the other side are non-paying onlookers, like the DeGiustis, who may have either strolled down from town to the Old Course with the intent of catching some of the action, or were simply passing through en route to another destination. Either way, The Links provides one of the best free seats in all of sports.

“Where else can you go where you can see the finishing hole or the finishing moments without a ticket, and you’re right there,” Mike said.

Tickets were not easy to come by for the historic 150th Open. The R&A sold 52,000 passes for each tournament round, but those were quickly scooped up via the R&A’s ballot system, meaning demand in the secondary market was high, with scalpers fetching well into the hundreds of dollars for a single ticket. Perhaps more than any previous Open, this was a story of the haves and have-nots.

On Sunday, the have-nots knew where to go: The Links.

The DeGiustis — Mike’s father, Anthony, was also in tow — actually had planned to stay in town and watch the final round in a pub until they discovered that most of the watering holes around these parts don’t have TVs.

“We were hoping to be somewhere where there’s a lot of excitement, and where everyone’s cheering and booing and drinking, and it’s not happening,” Mike said. “So we came over here earlier than expected.”

They came to the right spot. The public side of The Links isn’t just a place to watch golf. It’s a microcosm of life in St. Andrews. There are shops hawking golf merchandise. Social clubs for the town’s elite. The St. Andrews Golf Club. The Rusacks Hotel, where many players stayed this week, including McIlroy and Jordan Spieth, and many other notables, including the Manning brothers, Peyton, Eli and Cooper, who are part-owners of the property.

There’s a posh B&B called the Walden House. A subterranean old-worldy pub called the One Under Bar (clever, right?). There are mothers pushing strollers, elderly couples out walking their dogs and fathers teaching their sons the basics of golf. (“This is just one of the holes,” a father wearing a gray backpack told his toddler. “There are lots of holes everywhere.”) And on Sunday, there were also hundreds of rabid golf fans peering through and over the border fence .

Among them was Chuck Kinne, an expat Virginian and former college golfer at Randolph Macon University, and his wife Nicola, who now live on Scotland’s west coast. The Kinnes were spending the weekend at Nicola’s sister’s holiday home just down the coast in Kingsbarns. Chuck was at the 2005 Open at the Old Course when Tiger Woods won — “on the 17th hole,” he said, “you could reach out and touch Tiger, but you can’t get that close anymore” — but this year they were unable to secure tickets.

Chuck and Nicola had grabbed lunch at The Adamson, a brasserie-style restaurant in town, and then moseyed down to The Links in time to see the last few pairings tee off. Nicola said she was unaware that the public could get so close to the course.

“This is lovely,” she said as she looked up the 18th fairway. “Absolutely amazing.”

Added her husband, “It gives people a chance who can’t afford the four or five hundred quid to see a tournament.”

Like, say, Cohen Millel and Ross Cuthbert, teenage friends from nearby Dundee. Like so many other Links-goers, Cohen was pulling for McIlroy and timed his visit so he could see the four-time major winner set off on his quest for major No. 5. He and his pal hadn’t actively pursued tickets this year — “we’re saving up for next time,” Cohen’s mother joked — and said their Links visit was really just a different way to pass a Sunday afternoon.

“Something to do,” Cohen said.

That’s the beauty of The Links: its casual vibe. No tickets, no pressure. Come and go as you please. Or don’t come at all.

To the properties that line The Links, however, visitors, boarders and VIPs were coming and staying. How could you not? The second- and third-floor rooms and balconies are akin to skyboxes at the Super Bowl, only with charm. Through the big bay windows at 15 The Links, you could see a pair of antler chandeliers dangling from the ceiling and a set of ceramic Dalmatians on the mantle. A man sat by the windowsill sipping a beer. Life was good.

At the entrance to the Rusacks was the international sign for you’re-probably-not-getting-in-here: a security guard and a red velvet rope. Up on the rooftop, the 1995 Champion of the Golfer peered down on the scene and waved to fans. Yep, Sir John Daly. Up the way, on the balcony above the Old Course Shop, two elderly gentlemen in coats and ties sipped on glasses of red wine.

But the real fun was happening below, among the hustle and bustle of The Links legion. As the day progressed, new faces came and went, with the crowd growing — and sightlines growing dwindling — as the leaders neared 18. Around 6:30 pm local time, McIlroy arrived on the home hole, needing an eagle to force a playoff with Cameron Smith. Fans pressed up against the fence, desperate for a glimpse of the most popular player in golf. Children sat on their parents’ shoulders. A man in a dinosaur costume raised his selfie stick above the crowds. Drunkards climbed a lamppost and argued with police officers who tried to coax them down.

McIlroy missed his eagle try, a chip from short left of the green. The masses groaned. He missed his 20-foot birdie try, too. More groans.

But then came clapping and a roar of appreciation for their man.

“I thought the fans were great today,” McIlroy said after signing for a two-under 70 that left him in solo third. “I thought they were really, really good. Unbelievably supportive to me. Wish I could have given them a little more to cheer about.”

Nah, it was all good. The fans on The Links had plenty to cheer about.

As GOLF.com’s executive editor, Bastable is responsible for the editorial direction and voice of one of the game’s most respected and highly trafficked news and service sites. He wears many hats — editing, writing, ideating, developing, daydreaming of one day breaking 80 — and feels privileged to work with such an insanely talented and hardworking group of writers, editors and producers. Before grabbing the reins at GOLF.com, he was the features editor at GOLF Magazine. A graduate of the University of Richmond and the Columbia School of Journalism, he lives in New Jersey with his wife and foursome of kids.