The time and energy the Government is spending on unlocking doors to the overseas takeovers of Ultra Electronics, Meggitt and Inmarsat is extraordinary.

Once the deals are done, there can be no confidence that the undertakings made on R&D, headquarters and the like can be properly enforced.

The suspicion is that highly paid American and City law firms will have no trouble outwitting worthy civil servants and their legal advisers once the deals are signed off by government and investors. 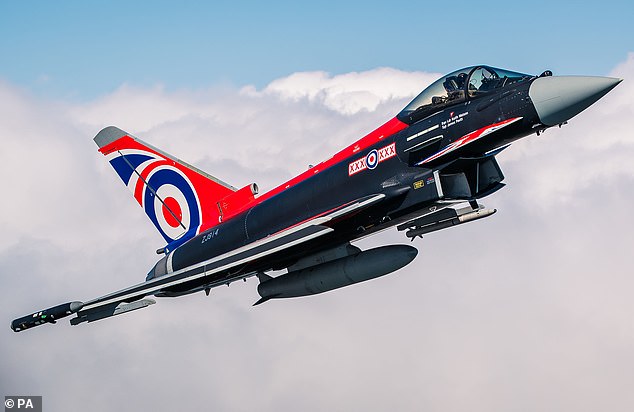 Government support: BAE Systems, which makes the Eurofighter Typhoon (pictured), was created through a series of mergers

At best, it is only highly sensitive, national security undertakings which will prove robust. There is an alternate route. It is easily forgotten that Britain’s aerospace and defense champion BAE Systems did not happen by accident.

It was created through a series of mergers, often with government encouragement and assistance, involving such great names in UK engineering as Hawker Siddeley Aviation, British Aircraft Corporation, Vickers Shipbuilding and the rump of Arnold Weinstock’s GEC defense offshoot, Marconi.

None of this could have happened without interventions by the Ministry of Defense and other parts of government.

The same process has taken place in the US where defense heavyweights such as Lockheed Martin and Raytheon are essentially products of Pentagon approved deals.

With similar energy and bosses that were more visionary, rather than intent on selling out, it might have been – or still be – possible to create a third force for UK defense to sit alongside BAE and Rolls-Royce fit for the new Nato age.

Among the potential constituent companies could be Ultra, Meggitt, GKN Aerospace (currently being carefully manicured by Melrose), Simon Engineering and maybe Babcock. All may be respected as sub-scale to be global champions sitting alone.

But such an agglomeration would ensure R&D, intellectual property and Britain’s role as a leading-edge aerospace and defense innovator was preserved. That would avoid the industry being gradually dismantled by financially driven players.

The micro-management of the overseas and private equity deals for UK engineers and defense groups already amount to a departure from capitalist dogma.

Boris Johnson should borrow from the Pentagon and Thatcher-Major playbook and put some heft behind creating a third force in UK national security.

Foreign Affairs Committee chairman Tom Tugendhat and Defense Secretary Ben Wallace have a smart understanding of our defense needs. They should get on the case.

IT is not the easiest of companies to run. It is besieged with problems, including an oversized pension fund and the attentions of a powerful outside shareholder, Patrick Drahi, with a 20 per cent stake.

It is also under pressure from regulators and government to get on with the enormous task of rolling out fiber-to-the-door broadband.

The last thing it needs is a union dispute. Having made what appears to be a reasonable offer of a 5 per cent-to-8 per cent pay increase to colleagues, it finds itself under siege from the Communications Workers Union (CWU).

The RMT union boss Mick Lynch has won friends for his plain speaking. He is respected as such good value that the Sunday morning BBC Broadcasting House program has made him a regular guest.

The reality is that he let the cat out of the bag when he seemed to call for a general strike.

Maybe the actions across the transport, telecommunications and other sectors – including the industrial action at the Financial Conduct Authority – are not strictly co-ordinated. But the ferocity of the pay revolt doesn’t look entirely accidental.

Executives at several of the companies targeted have made a rod for their own backs. In the rush to restore they own pay packets post-pandemic, they have created a fat-cat narrative for union critics.

The CWU notes that BT’s chief executive received a 32 per cent uplift in his total remuneration this year to £3.2million and claims he earns 86 times average pay levels.

More pay restraint and modesty in lifestyles at the top might make for calmer industrial relations.

Saudi Arabia’s love bombing of the UK continues with the proposal to take a stake in Britain’s flagship luxury car company Aston Martin.

The James Bond motor firm is weighed down with close to £1billion of debt and an interest rate bill of £130million this year.

The latest proposal follows last year’s investment in Newcastle United. The real Saudi prize would be an order for next generation fighter jets from UAE.